Royal Kunia real estate is mainly composed of new homes and modernly designed subdivisions. If you prefer a modern community, then Royal Kunia is it. The place is definitely modern. It’s located at the west of Honolulu, just above Ewa Beach, and on the other side of the freeway. Developments here have been ongoing since 2004. 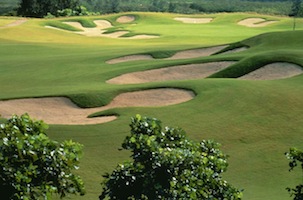 Compared to other neighborhoods, Royal Kunia is more spread out and has better long-term planning of streets, especially the major ones. Compared to other communities in Oahu, the streets in Royal Kunia are wider. They also have sidewalks everywhere. Thus, this makes it a perfect place for jogging or walking.
When you visit this place, you’ll definitely notice that the whole area is very clean and neat. Aside from that, you’ll also find that there are open spaces between the houses. Royal Kunia is just right above the Ewa Plain, but the place has far fewer houses. Because of this, traffic is not an issue here. Further more, there is also an off-ramp from H-1, which makes Royal Kunia accessible to everyone.
For home buyers who like newer properties with open floor plans, Royal Kunia is definitely for them. Most of Royal Kunia’s model houses have an island kitchen that opens to the living room. This design gives the houses a modern and open feel to it. Castle and Cooke, the developer, also made available a variety of colors and models to choose from. This avoided a cookie-cutter type of neighborhood.
Royal Kunia houses can be as large as 2800 sq. ft with 5 bedrooms, while the smaller starter houses are about 1300 sq ft. The prices of Royal Kunia houses range from $500k to about $900k. The $900K houses are the largest models with available views of the ocean. Indeed, there are houses with ocean views because the area is elevated above the Ewa Plain. There are several houses in Royal Kunia that definitely have a nice ocean and Diamond Head views from multiple rooms.

There are two options to get to Schofield. One way is the back road that begins in Royal Kunia. Using this way, takes about 25 minutes for commuters to reach the back gate. Because of this, Royal Kunia became a popular location for soldiers assigned at Schofield. If you’re part of the military, make sure to check out Royal Kunia.

If you want to go swimming or just sun bathe and get tan, you either drive to Ewa beach or Ko Olina. From there, you can check out the beautiful beaches available. In Ko Olina, there are shark pool and restaurants available for your pleasure.

One thing that is absent in Royal Kunia is its own school. However, the community and the developer are already lobbying for a second phase of Royal Kunia, which will be big enough for its own school. The second phase plan is still a work in progress. Also part of the plan is to include a community center. If everything goes well, it is believed that the developments should begin this 2010.

The weather in Royal Kunia is definitely similar to all of West Oahu. In the morning and most of the year, you’ll feel a nice cool breeze. At night, it’s usually raining. On the average, it’s usually 5-10 degrees warmer compared to the east side. Compared to Ewa or Kapolei, there is more breeze here in Royal Kunia.

Big level Lot with water and sewer line connected and easy to build good location close to mall and Hi way just 30 minutes to down town The land is 5888 sq ft may ...

Based on information from the Multiple Listing Service of Hicentral MLS, Ltd. Listings last updated on . Information is deemed reliable but not guaranteed. Copyright: 2023 by HiCentral MLS, Ltd. IDX information is provided exclusively for consumers' personal, non-commercial use. It may not be used for any purpose other than to identify prospective properties consumers may be interested in purchasing.