A mostly residential area on the Hawaiian island of Oahu, Hawaii Kai, is a census-designated place on the eastern end of the island. It is home to a number of golf courses, parks and beaches and is a popular place for both native Hawaiians and immigrants from the Mainland to aspire to. 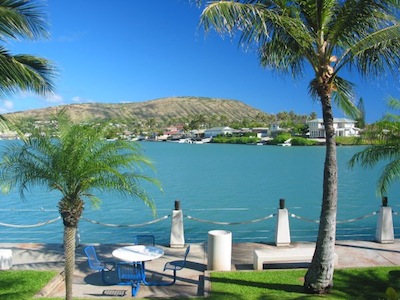 The market for Hawaii Kai real estate was on a seemingly endless path upward until the financial crisis began to hit at the end of 2008. When investments began going bad and the credit market froze up, and then the real estate market was hit. Homes prices finally began falling across the U.S. and Hawaii saw some of the biggest declines. Nonetheless, Hawaii Kai has been showing signs of improvement in its real estate market, with the most recent figures showing prices of both single-family homes and condos up on an annual basis.

According to the Hawaii Board of Realtors, in March, there were 33 new listings of single-family Hawaii Kai homes for sale, an increase of 13.8% year-over-year. Year-to-date, there have been 95 new listings in the first three months, an 8% increase from last year. The inventory of single-famliy homes at the end of March in Hawaii Kai stood at 108 homes for sale, down 19% from the end of March 2008. There were 19 homes sold in March, 18.8% higher than the same time last year. The median sales price for single-family homes was $770,500, a 2.7% annual increase. The average price, however, was $861,750, down just under 35%. Homes are selling much more quickly, however, as they only spent an average of 23 days on the market in March before selling, more than 72% better than the same time last year, when that figure was 86 days.

The condo market showed similar trends, though prices were up both in terms of the average and the median. There were 36 new condos listed in March, a 71% increase from last year. This put the total inventory of condos for sale at the end of the month at 78, down nearly 30% from March 2009. There were 13 condos sold in March, down slightly from last year, when there were 16 sales in March. The median price was $545,000, up 5.4%, while the average price was $548,962, up more than 14% year-over-year. Condos spent an average of just 28 days on the market in March before selling, substantially improved over last year, when that figure was 93 days.