Kahala is located within Honolulu and has some of the most high priced real estate that can be found in Hawaii. The area rose to popularity in the 1960s as more and more Hollywood elite were visiting the area and commenting on how enjoyable it was, turning it into a prime tourist location. The Hilton established a resort hotel in the area during this time which helped spur the popularity of the area. The Kahala Hilton featured beaches that were exclusive for guests to utilize, a private golf course for members only that were staying at the hotel. Frequent Hollywood elites that visited the area was John Wayne, Lucille Ball, Frank Sinatra and Eva Gabor, all of which commented that it was the go to place for privacy and relaxation. 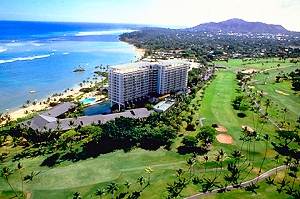 Kahala is known worldwide as having the most luxurious and well-known resorts. Many famous and influential people have visited the area including Queen Elizabeth, the Dalai Lama and Princess Grace. Those who have visited the area have helped the reputation of the area, as well as, spurn the interest that others have in visiting the area. Kahala is much similar to the Waikiki area. There are beaches to go to that are considered less crowded and a bit more secluded than beaches that are found in other areas of Hawaii. The whole area has gorgeous views that are considered some of the most beautiful in the world. Those who visit the area often comment that they enjoy themselves immensely because they do not have to fight the crowds of visitors to enjoy the beach, and have a completely unique experience than others who visit the Hawaii islands.

The two largest hotels in Kahala is the Kahala Resort and Hotel and the Kahala Mandarin Oriental. These two hotels have really helped the reputation of Kahala become one of luxury due to what these hotels offer guests. Many of those famous celebrities that have come to the area have stayed in these two hotels. Other celebrities that have stayed in the area are Liza Minelli, Burt Reynolds, Johnny Carson and Toney Bennett. Even the beloved Princess Diana with Prince Charles enjoyed staying in the area.

Real Estate and Living in Kahala

Since the popularity of the Kahala area has increased in recent years, this also means that the desire to live in the area has also become more popular. Because of this most of the real estate that is owned in Kahala is considered some of the most expensive and most beautiful real estate to own in the entire United States. Most of the residential homes are large in size and have features that most people dream of having, such as pools and large lawns. Many of the homes that are in the area are beachfront properties, such as those found in the communities of Black Point and Diamond Head. However, there are also those properties that are on the hillside such as Waialelki, which homes have views of the ocean and are considered very relaxing.

Those who live in the Kahala area are a mixture of people. There are the older inhabitants that live in the older and most historical homes. While those new residents to the area live in eh much larger homes that are newly built, all of which offer various levels such as a mansion, a simple condo or anything else that are considered luxurious.

Another popular form of residential property is vacation homes, which are available at all different levels of luxury, including those mansions and condos. Because of the various residential properties that are available in the area the area has become a popular area for investors. Many of these investors have made a career out of the investments that they have made in the area. For example, they may purchase complete neighborhoods and restore the area in order to sell the homes for a bigger profit. One of the most popular investments that people are making that continues to grow in popularity is the idea of tearing down old houses and replacing them with new more up-to-date homes. This has helped the area to become even more luxurious and is slowly spreading out to include the whole area.

Become a Member of the Kahala Community

No matter what your standards and options that are you are interested in, a real estate agent in the Kahala area can find some type of property that fits your needs. Most people who come to the area decide to live in one of the many resorts that are in the area, simply because they have everything that most people want in a home. However, there are those that choose to purchase a separate vacation home that is not affiliated with any resort. Those who purchase a separate vacation home in the area eventually mingle with all the residents of the area after a certain time period, which means that no matter where you live you become part of the neighborhood and everything that entails being part of a neighborhood.

In the area, most people use their own personal vehicle to travel, however for those that are more interested in utilizing public transportation will not be disappointed in the Kahala community. There are many public transportation vehicles available, as well as having numerous amenities that are more pone to be found in a larger city, this includes shopping and all the conveniences.

Opportunities for Investment in Kahala

Kahala real estate is probably the most popular investment option that is available in the Kahala area. For more than half a century, the neighborhoods in the area have been growing and becoming more luxurious. For those that are interested in investing in real estate, they should realize that most of the real estate in the area are sold on the higher end of the market. Even those properties that are considered to be tear down properties and then later replaced with higher end homes sell for more than a million dollars.

Those who work in the investment world will often commend that Kahala is a great place to invest in because of the popularity of the area, as well as the economy being mainly tourist fueled, means that those who invest in homes find it very easy to turn these investments into vacation homes to sell or rent to people. Plus, since the area is desired by many people it is fairly easy to find someone to purchase the home, which means that there are always prospective buyers. Most of the statistics that are available concerning the real estate market in the area shows that over the years the market has done nothing but increase. Because of the desire of the location, coupled with the tourist economy still thriving in the area, the real estate market will continue to thrive for years to come.