As visitors come upon Kona by air travel, they are stricken by the beauty of this coastal town. Kona's airport was built upon a centuries-old flow of lava, and the nearby towns and the resorts that abut them appear to have been chiseled into the flows stemming from nearby Mauna Kea and Mauna Loa.

From northern Kohala to South Point, which is famously the southernmost point of the USA, stretches the Kona side of the coast. Due to the blockages provided by Mauna Loa and Mauna Kea, there are very few clouds that reach Hawaii's west side. This nearly constantly sunny coastline gets a mere 4% of the rainfall in the islands, and the perfection of the weather caught the attention of developers, who have quickly built up many gorgeous resorts along the coast of Kona.

Also known as the Kamehameha coast, the Kohala coast features a host of historic sites, such as the site of Captain Cook's landing, the birthplace in North Kohala of King Kamehameha, and the point of refuge on the island to the north of the town called Hookena, now known now as Puuhonua o Honaunau National Historical Park.

The bustling Kailua-Kona now has a fun and tourist-oriented ambiance. Full of oceanside shops and quaint and cozy eateries, there are also a number of popular beachfront hotels, such as the Kona Seaside, Kona Reef, or the Kona Surf. You can also find a number of lovely bed and breakfasts located behind the town, including Merryman's or Kiwi Gardens. Coffee farms can provide visitors with a scenic look at the rural part of the island as well as breathtaking vistas anywhere on the road.

The lovely town of Kailua-Kona, as well as the surrounding areas, are a worthwhile tourist attraction. Featuring a population of 10,000, most of whom work at the famous local coffee plantations or in the ever-growing tourist industry, Kona's history is storied and lengthy, particularly since the 1812 return of King Kamehameha. The king chose to rule his newly-acquired nation from Kailua-Kona, and eventually he retired there to enjoy the fabulous fishing that's still found along this storied coastline.

The king resided in a hut made from grass, and now this historic site is home to the King Kamehameha Hotel, which is proud to boast the only sandy beach for swimming to be found in Kona, and it is also the site for the famous Royal Luau. The Ahuena Heiau resides in the shallows of the narrow beach located in front of the King Kamehameha Hotel, where the royal canoes once launched. The temple honored Lono, a fertility god, and provided a meeting point for the king and his advisors.

Kona has become internationally famous as the home of the Ironman Triathlon World Championship. Each October, competitors come together to partake in a 26.2 mile run, 2.4 mile swim, and 112 mile bike ride. With the international broadcast, the small town finds itself bursting with world-class athletes prepared to take part in this event. Athletes and their supporters book the local hotels months ahead of time, and there's not a rental car to be found in the area. Kona's quaint atmosphere prevails, with its turn-of-the-century architecture and small eateries, but it has sufficient lodging even during its busiest season, including the Kona Seaside Hotel or Kona Bay for those who are pinching pennies, or the Royal Kona and the Kona Surf for bigger spenders. Search Kailua-Kona real estate today. 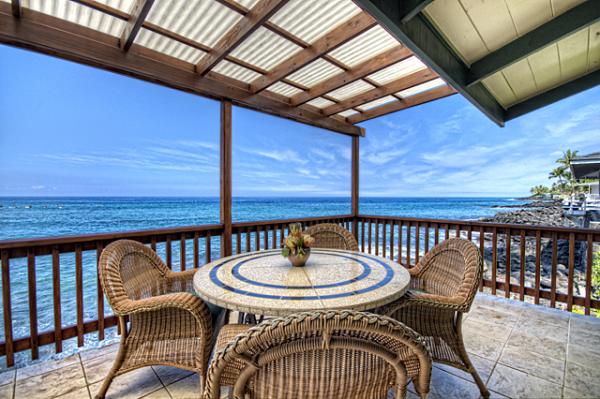 Kohala, which is considered to be the oldest part of the island from a strictly geological standpoint, is sectioned off into South Kohala and North Kohala. South Kohala, famed for its gorgeous beaches and luxurious resorts, is also rich in historical spots, including petroglyphs and burial spots. Upolu Point, the part closest to Maui, down to Kona makes up the resort part of the area. Laurence Rockefeller began to lease the lava fields in the 1960s after discovering their inherent natural beauty, thus building up the resort area and attracting a more upscale clientele.

Shortly after the appearance of these resorts, more resorts began to sprout up around Mauna Lani and Waikoloa. The Hilton Waikoloa Mega-Resort, a huge development that includes an onsite tram system that travels between the tennis courts and the lobby, dolphins in the private lagoons that are found on the grounds, and a system of pools that requires 750 thousand gallons of fresh water to fill them; the Mauna Kea Resort is an older, more established resort, but it has been outshone by the advent of the Hilton offering.

The Shores of Waikoloa, the Orchid at Mauna Lani, and many other hotels followed the initial resorts, thus making the Kohala Coast the part of the island most populated by hotel rooms. The beauty of the area makes it a popular vacation spot for people from all around the world, and the Hualalai Resort, the area's newest addition to their many resorts, is setting records for luxury and style.

The Hapuna Beach State Recreation Park is one of the most famous and gorgeous white sand beaches on the Big Island of Hawaii, and is suited for surfing as well as swimming. Just south of the beach is the Mauna Kea Hotel, and just behind the hotel visitors can see beautiful vistas, including large coffee plantations.

Featuring some of the greatest snorkeling and swimming to be found on the Big Island, the Kona Coast is the sunniest spot on the island as well, with all the beaches available to the public.

The only beach to be found in Kona, Kamakahonu Beach is a smaller beach found near Kailua Pier in beautiful downtown Kailua-Kona, close to King Kamehameha Kona Beach Hotel.

Located three miles to Kona's north along route 19, Honokohau Beach is most popular with snorkelers, surfers, and fishermen. Renowned for its nude sunbathing, which local authorities are attempting to ban, the shallow waters of this beach make for safe swimming.

The beaches of North Kona stretch two miles north of the airport in Kona, at Pine Trees. While these beaches are not ideal for swimming, they are great for surfing and for beachfront strolling. Luahinewai Pond, Kua Bay, Makalawena Beach, Kiholo Bay, Mahailua Bay, and the Kona Beach State Recreation Area are all lovely beaches that can be visited.

Rich in ancient archaeological sites, the white beaches of Anaehoomalu Bay are nestled among black lava flows. Simply follow the signs from the roads off of Waikoloa Resorts to visit this beautiful area.

Offering half a mile of great surfing and swimming, Hapuna Beach features gorgeous white sand and is one of the most visited beaches on the Big Island. Though the sea gets a bit choppy on occasion, this beach has excellent facilities for visitors.

With a sandy bottom that promotes safe swimming, this beach is near the Mauna Kea Beach Hotel. Its bay is kept safe by a nearby fringing reef.